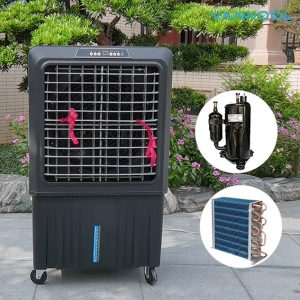 One of the efforts to increase broiler chicken production is the use of closed system cages or more popular closed houses. Initially, the closed house system was implemented in sub-tropical areas that had four seasons, but from several studies showed that, in tropical areas that have two seasons such as Indonesia, it also has an effective influence in regulating the environmental conditions needed by chickens. Closed house cages were originally used in the poultry breeding industry. But currently the use of closed houses has penetrated into the production of commercial broiler chickens. A closed house cage is a closed cage system that is able to help optimize environmental requirements that include windows, temperature & humidity. With a closed house cage, there is a stable movement of air and the level of air humidity in the cage can be adjusted synchronously according to the needs of chickens. Broiler chickens will grow optimally if they are at an ideal temperature, which is 19-210C. while the temperature in Indonesia can reach 33-35 0C in the dry season (Rasyaf, 2001).

Some of the advantages of using a closed house cage include the number of chicken densities in each square meter is more, chickens are more prosperous and calm, air humidity and temperature are well maintained, growth and productivity increase, the need for fewer employees is replaced by the role of technology, and weather changes that do not have a major effect on the conditions in the cage. Besides some of the advantages of closed houses, of course, there are still some disadvantages including, the costs incurred are more expensive than open houses. The estimated cost of making a close house cage per 1000 heads. In addition, a lot of electricity costs must be incurred every month to support the electronic devices of the ventilation system to work. The ventilation system is the main thing from the difference between the open house and closed house cage systems. The completeness of this ventilation system consists of a fan (fan), evaporative cooling pad, controller and cage curtain.

Fan is a device to create air movement. In general, there are 2 types of fans, namely exhaust fans and blowing fans. The exhaust fan functions to suck the wind and the blowing fan functions to blow the wind. The parameters that need to be considered in fan operation are the number of fans that turn on and the length of time the fan is on. The right fan selection is very necessary in order to produce air speed and temperature that matches the minimal electrical power consumption.

air conditioner that utilizes evaporation of water. Evaporative Air Conditioner is connected to a pump that will wet it with water. When hot air from outside the cage enters the cooling pad, the water will take heat energy from the air so that the water will evaporate (evaporation process) and result in a decrease in the temperature of the air entering the cage. Breeders are not recommended to wet the cooling pad when the humidity is >75%, because it will increase the humidity of the cage.

The cage curtain is a side cover of the cage so that the chickens are protected from outside interference. In addition, cage curtains are also useful to help maintain the air temperature in the cage (especially during the brooding period), prevent direct wind exposure to the chicken’s body and prevent rain splashes from entering the cage.

Thereis no advantage of the close house cage system over the open house. Starting from the density of chickens raised, the weight of the chickens produced, the percentage of mortality and so on. The hope is that with the comparison of information from the two options above, broiler farmers should immediately decide on investing in a modern cage system.

After farmers know many things related to the close house cage system, the next important thing is the need for synergy with various parties. Such as governments, entrepreneurs, banks, and ranchers. For example, farmers who do not have enough capital in developing their business, then the bank can provide capital assistance with affordable or lighter interest. Of course, this needs to be considered in order to be a catalyst for massive changes in conventional broiler breeders to switch to modern systems.